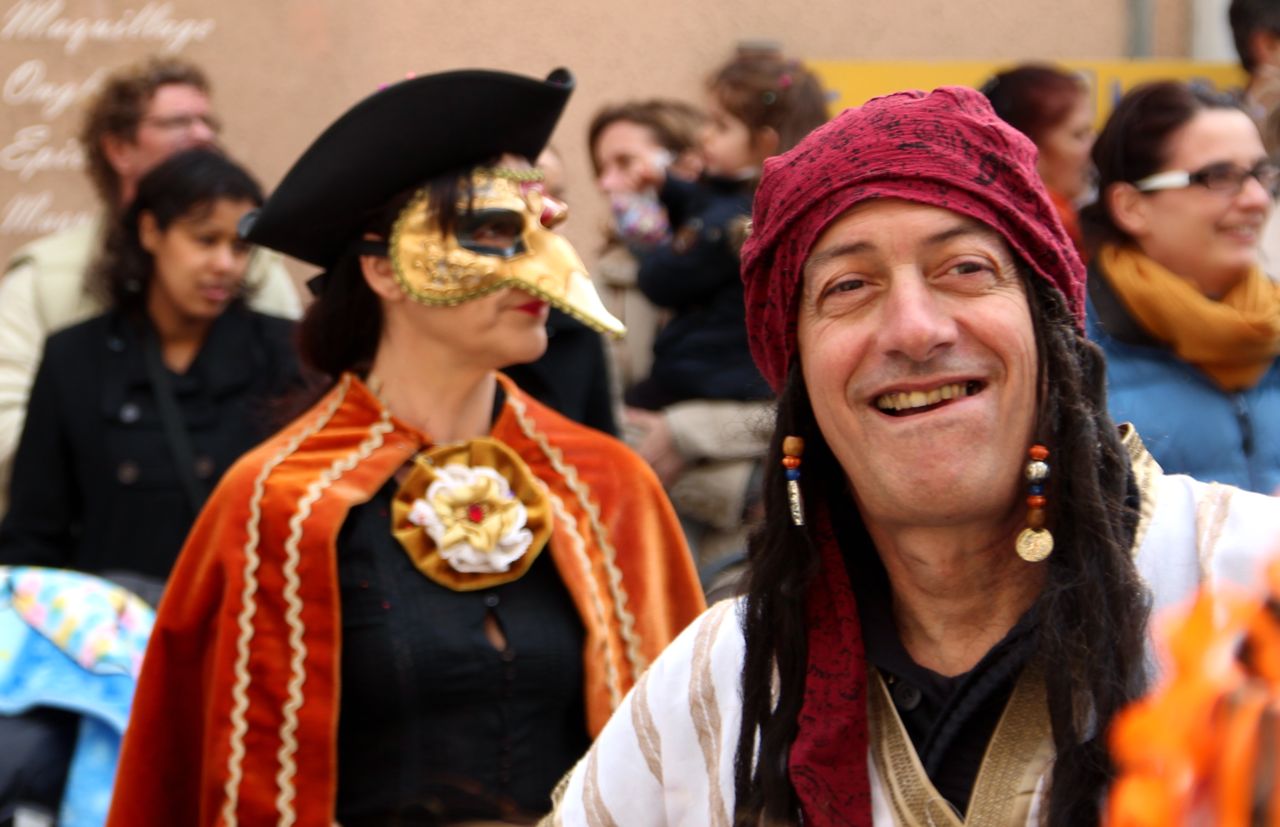 Carnaval is an event that usually takes place before lent in most Catholic communities. Monsieur Carnaval, a giant paper-mache man, represents all the bad that has gone on during the course of the last year.

The community celebrates Carnaval by parading Monsieur Carnaval through the town, and symbolically eliminates the bad by burning him at the end of the celebration.

Children were pulled through Capestang in a tractor, throwing confetti at the crowds as they pass by. Each person is covered in a rainbow of paper bits, stuck in their hair and over the ground as they walk.

A drum band bonging and banging in a decorative float, smile at the community below. Daniel’s teacher is among the musicians, and he is proud to see her celebrating with the rest of us!

A group of small children, dressed up like judges, were walking behind the drummers, their black cloaks dragging. They represented the judgment of execution on Monsieur Carnaval.

Our Capestang choir also joined in on the festivities and walked behind the first float. Singing traditional Carnaval songs whenever we stopped like: Adiu Pauvre Carnaval, is a song saying goodbye to our friend Carnaval, Fumo La Pipo, translates to smoke the pipe (but the song says with no tobacco) and Tourdion (Quand je bois du vin clariet) about drinking wine.

Only a handful of choir members came out to brave the cool weather and walk the streets with the Capestang community, but all were in good spirits, and seemed to have enjoyed themselves! The theme of Carnaval this year was recycling, and the members did a smashing job of dress-up for the event!

All the citizens of town joined in the walk, winding through the narrow streets of Capestang. Bookending the parade was a local folk band, joyously playing traditional French music while we meandered along.

The feeling in the air that day was fun and light and the children ran all over the streets, laughing and playing. Angelina glued herself to the other choir mom’s children, and Daniel found a young boy from his school to pal around with. All of our kids immensely enjoyed the celebration, and kept up with the parade nicely. Most of the time, our kids were the leads, and we found them in the front, directing the way!

It seemed that the entire population of Capestang was out today, all dressed up in costumes from dogs-clowns on stilts, and everything in between. Daniel was supposed to go go to a handball match with his team, but accidentally got his hand caught in a wind slammed door, just before leaving. Lucky for us, we still managed to make Carnaval, important too, being our first in our new village.

The colorful celebration ended at a local field behind the Recreation Centre, where we heard speeches saying goodbye to Monsieur Carnaval. Some of the speeches were followed by laughter, saying we will see him later in the garbage bin!

The band trotted on, while two little girls danced in front wearing Carnaval costume. At one point the choir, some parents and children held hands in a Congo line, while singing Carnaval is Arrabat and danced in a big circle through the crowds, big smiles on everyone’s faces. There is nothing better than hearing the sound of laughter ringing high above the crowd.

Finally the children lay down the judgment and it was time to carry out the punishment. The fire department gated off Monsieur Carnaval to keep the Capestanese safe.  Firecrackers went off in a loud bang, and we watched Monsieur Carnaval go up in smoke, in a big ball of fire! The crowds slowly dispersed.

Alfonz had to drag our kids home! They did not want the day to end…