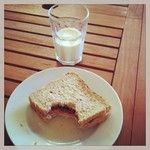 What do I miss most about Canada? Having an abundance of peanut butter!

Friends bring me organic smooth peanut butter from North America when they come to visit and I end up rationing it until the next person brings me more. I have a crazy protective attitude towards anyone that wants to eat my peanut butter and have managed a wee stockpile from not sharing.

Today that all changed and I gave the kids huge peanut butter and jam sandwiches with a big glass of milk. My hoarding has stopped and my generosity is back in its place. I guess starting in a new country does have some side effects and idiosyncrasies after all.

Alfonz has a great story about when he first moved to Canada at eighteen and someone asked him if he would like a peanut butter sandwich. Of course, he said yes. When he had his first bite, to his surprise, it was salty. Alfonz, revolted by the experience, knows peanut butter in Europe as Nutella, made from palm oil, icing sugar, chocolate and hazelnut spread- every kid’s junk food dream. He has not touched it since and still goes on about how he cannot believe people eat it at all! No worries that Alfonz will find my stash on the highest shelf in the pantry…

Moreover, when the kids were small, we decided to try having an exchange student to make some extra money and learn about a new culture. For two weeks, we had a very tough experience. She was from a very well to do Japanese family and in her broken English would ask me to wash her laundry each day by hand to be ready by morning. I honestly tried to appease her. I made homemade foods, but she refused to eat anything with vegetables in it. She lived on pasta and dessert for two very long stressful weeks. About day seven, she mentioned to me that her cook made her peanut butter sandwiches for breakfast each day and if I could possible make them for her as well. I am sure you know where this is going. The expression on her face when she bit into the sandwich was worth every miserable second with this girl. Later when I returned to the school after the two weeks, the organizer of the program told me that they gave me the most difficult girl because my husband is Japanese. I told her, my husband is not Japanese. She said Hamori is a Japanese name. I introduced them, and sure enough, he is in fact Hungarian.

That is what on my mind, peanut butter and jam sandwiches.