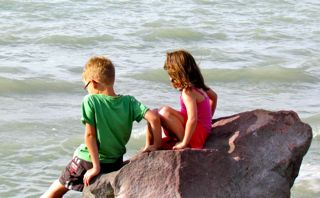 After 7 months on the road, we settle in to our new village routines.

The kids have been through there own version of our family adventure, and although they loved most of it, they did find adjusting to life on the road more unsettling than we initially wanted to share. But I promised myself, no matter what, to share the good, the bad and the ugly. I have been holding back on this one, here’s why.

When people make changes in their life, it is easy to stop after the first bump, or negative experience, throw your hands up and say I give up! Most people find change uncomfortable, and easily revert back to their old behavior, or lifestyle. I didn’t want to put any negative connotation on our decision of moving from Canada, looking for a new life. What we achieved is exactly what we were after, a life based on time currency. But things are never quite that simple.

The children helped us pack up their rooms, and shared in the process of giving away most of our worldly processions. We didn’t know how it would effect them in the long term. Short term we did everything right. We explained that the stuff could be replaced once we find a residence in Europe. We talked about the benefits of world travel, and if all fails, we come back and pick up where we left off. We eased their fears.

We knew they banked on coming back, a natural response for a child going into the unknown. It gave them comfort to think, worst-case scenario, we fly home to White Rock, they go back to Sunnyside Elementary, mom goes back to Safeway, and dad will go to work each day from 9:00-5:00, and be home in the evenings. A happy thought, for a child, when it is all you know.

Moving into the townhouse 4 doors down did help in keeping routines during transition until they finished the school year. We held fast to the program of walking them to school, interacting with the same neighbours, our routine until our last day.

When the day came to say goodbye, no matter how prepared we thought we were, we couldn’t see into the minds of Daniel and Angelina and their true emotions didn’t come out until long after the voyage began.

Spending loads of time trying to analyze the outcome of our journey was impossible as any precedent involved families with their own member’s unique personalities, and any information acquired was null and void.

When we lived out of our van, or travelled around with the kids from the Walnut Apartment in Budapest as our home base, a few interesting things happened, and the effects started to show.

Daniel was craving routine, and tried hard to maintain some normalcy, as best as an 8 year old can. He found comfort in personal items, a few toys and games. Daniel developed a self-soothing tick, and struggled with not seeing his best buddy Nick and Katie from his class. He dealt with this loss by talking about them and soon he managed to accept the concept of travelling around and even enjoyed it, but held on to the ideal of going home.

While Angelina seemed unaffected at all during our travels, and didn’t really foresee ever missing her friends in BC, she took each moment as they came and smiled at simple activities, spend loads of time playing with us, and her sunny disposition persisted each day. I thought, how lucky!

Daniel’s mourning for our old life took many forms. He often talked of his friends, things they did together and his teacher Miss Hu, making references to his class, and what they might be doing without him there. I waited for the tears that never came. I watched for the signs that he wasn’t dealing, but he was, in his own way, he down loading his memories to hard drive to replay at will. Remarkable, that his BC memories became fairytales. This is how he dealt with his feelings.

On route both kids enjoyed the sites, the food and the outdoor adventures. What they missed was routine meals, knowing what was coming next, even though we talked about plans as a family, a child’s understanding of 1800 kilometers in 1 week is limited. Explaining what moving to a new country will be like, instills fear in children, as it is the unknown. I watched my kids hold on to what they know as we Gypsy travelled around for 7 months.

As soon as we found Capestang we immediately rented a village house and stopped road schooling, and it was solely for Daniel that we placed them in the public school system. He was developing an insecurity that we could not have predicted; he craved: his friends, the community we raised him in through the Montessori program and connections that a little sister and parents could not fill. He needed his support system, the group he learned to count on. He needed his examples. So, after loads of thought and what was best for us as a family, we gave Daniel what he needed.

As soon as he was back in school, and a very structured traditional style school, even with the huge language barrier, he started acting reassured. He liked knowing what was expected, when things were due, and he never had to worry about what was coming next. It is all laid out for him in his planner. He started talking less about the past and enjoyed the moment he was in. Any anger or frustration subsided, and my little man turned back into the loving little boy that left Canada last year.

They may not seem to appreciate us showing them Europe but one day they will thank us! We have instilled in them an early love of travel. As Daniel helps plan the next adventure to Morocco with a wanderlust we wished he had last year, still better now than never.

The thing about long-term travel, the idea is great, and we try to prepare the kids and ourselves as best we can, but my advice is to factor in your child’s personality. Our kids do not miraculously change their character just because we decided to take them on an adventure. We are all individuals.

From here we take shorter trips, 2 weeks here, one week there. He is off my worry list. His tick has vanished. His nature is calm. His schoolwork is good. How can I possibly complain? We are all learning.

Angelina is used to her new routine, and now that she has a minute to reflect, guess what? She finally started missing her friends and family back home. Where Daniel dealt with the changes along the way, Angelina ignored her feelings, and now in a resting state, it has hit her. She occasionally cries and feels sad and even wants to go back. We listen to her, and say lets give it a year, and see how we feel then. She’s a bright kid and loves school, has a herd of kids following her around on the playground, and dislikes being the centre of attention (maybe a mix up at the hospital after all) and longs for her two little buddies from kindergarten, Sofia and Mattea. She knows how to fit in with them. She knows what it is like to be one of three very strong personalities. Now we deal with Angelina’s mourning. Hopefully it is short lived!

There are many bumps on the road to happiness, and giving our children space to handle their changes, and their big feelings in their tiny packages, allows for self growth. Life can be difficult, and they equally need to learn to process their own stuff, on their own terms. I stop myself from taking over and trying to handle or fix it for them.

Right now they are processing.

Time will tell if our travelling lifestyle is a benefit or not. For now we rest, process and deal.

We go to Morocco during Spring Break, the kid’s weigh in heavily this round.