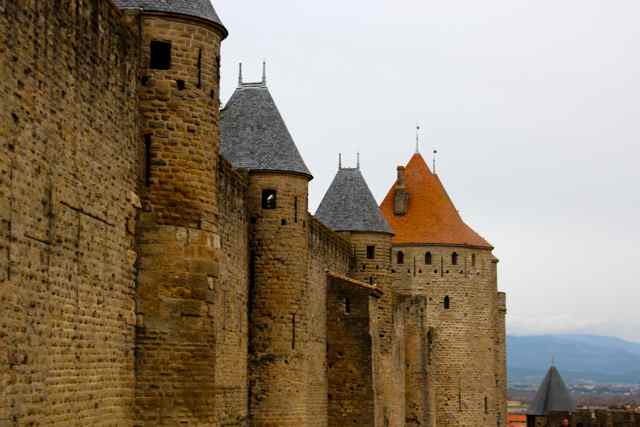 When we decided to start living our dream life and buy a B&B, we researched many tourist areas of France. We kept coming across this region in the Languedoc, known as the #1 tourist destination in the world.

For many reasons; the Canal du Midi, the great wine, the river Aude, the close proximity to the Mediterranean Sea; all bring people from all over the world to witness its beauty. Cathar castles are among the historical sites people come to experience. They litter the picturesque countryside and have a majestic pull. Carcassonne Castle is the most famous Cathar castle in France.

Carcassonne Castle in the department of Aude, is a fortified city, completely surrounded by an intact wall, built by the Cathars, which looks over the modern portion of Carcassonne city. Enormous in stature, suspended on a cliff, the skyline mesmerizes, with stone architecture and its sharp pointy towers pierce the sky. Built by the Romans, this trading town was along the former boarder of France and Spain. It was completely reconstructed in the 1850’s after complete disarray, and is now a protected historical site.

The Catholics stamped out the Cathars, a religious sect known for their belief of wealth being a sin and listening to the sermon of the mount. Many battles and bloodshed throughout the 11-13th centuries were from these differing views. The Cathar believed in 2 gods. One, Rex Mundi, translated to King of the World, was their ruler of all things physical, our body and power. Another equally powerful god was the ruler of all things spiritual whom they worshipped, god of love, order and peace. This duality caused the uproar, as the Cathars lived high in their castles and churches, away from the other people of their time and relinquished all material things, thinking them evil. Their purpose was to transcend the material world and be inline with pure love. Where do I sign up?

Carcassonne Castle has been the perfect location for many historical and fictional movies. The castle is the perfect version of what your imagination would conjure up, when thinking about a princess locked in a tall tower, or armies fighting opponents on horseback, taking over rule from a bloodthirsty king. Kevin Costner’s Robin Hood was filmed here and that fact still brings thousands of tourists here each year, myself included. Have you seen it? Here is the theme from the movie with great shots of Carcassonne!

Free to enter the castle, we walk over the drawbridge, and follow along narrow streets lined with shops and cafes, engaging in trades as the ancient folk of the region once did. It is the largest Cathar castle in Europe, and I couldn’t help but notice Disney’s resemblance to Carcassonne. They effectively light the castle at night, purposefully looking like fire-glow.

Our neighbors drove the kids and myself, while Alfonz was in Hungary, to the famous 11th century castle, on the day they had knights and maidens walking throughout, fully clothed in costume. Two had hawks perched on their arm, another bow and arrow, and others armed with various medieval weapons. The kids loved it! They had sword fighting, calligraphy and archery for the children to partake in. It was a special day to bring the kids. The castle has tourist every day of the year, and today the church had Acapella singers, their voices carrying throughout the religious house and into the streets where we stood. We missed going inside by a few minutes, but would love to experience this first hand.

The Christmas markets are in full swing in France, and Carcassonne is no exception. Beautiful pottery and hand made jewellery, dried sausages and fresh cheese at every turn, delicious wines to try and wooden toys for the kids. We walk around the beautiful city of Carcassonne and enjoy the medieval scenery.

Our friends have a tradition of entering certain shops while they visit Carcassonne with their son L. They took us to two different toy stores, and we let the kids touch and feel the wood puzzles and weapons. Then we went to a candy store. We bought biscuits and chocolates, lollypops and sampled divine bonbons. We all were kids in this candy store and our eyes were big as moons. I will surprise Alfonz at tomorrow’s coffee with some of these treats. If there are any left!

After walking within the old city walls, we made our way to the town centre, just below the castle. My friends found out online that today is the day the city turns on all their Christmas lights at the same time.

In darkness of the square everyone waits. The train rides have no lights as the sun slowly sinks. Stands with food and crafts wait, and the Ferris wheel is still. We are at the front of the line for the giant wheel and are the first to see the lights on from above.

The big wheel is always a treat for the kids. This one is huge and you could see the whole castle in the distance watching over us, on the edge of the mountainside. The square was decked out in luminescent light and the Christmas tree shone in the city square.

People came out in droves to witness the Christmas lights ignite. Carcassonne made it a very special moment, and the people cheered as the city lit up.