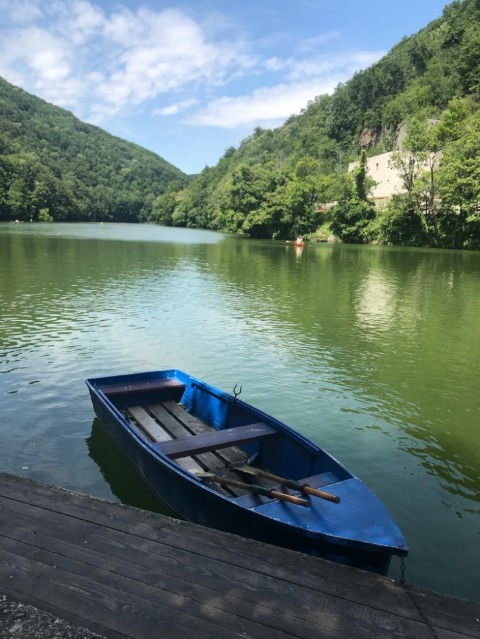 Hello! I am a teacher. Over the course of 10 years I have been teaching kids to save our planet or at least squeezing it into every element of English class that I can!

I encouraged them to take less than 2 minutes showers, use energy efficient & long lasting light bulbs, use water efficient shower heads and low water using toilets, catch rainwater to water their gardens, compost organic waste and create beautiful dirt to grow veggies and flowers in, plant a variety of blooming flowers for the bees to survive, buy organic and seasonal, locally grown sustainable foods, plant trees to help clean the air we breathe but also eat fruit they produce, use reusable material bags when shopping; ones that can be thrown in the washing machine, use cold water with organic products to wash clothes, recycle plastic and glass products and try to buy plastic that are made from recycled plastic. I encourage them not to use pesticides or harsh chemicals when cleaning, use organic natural products so that when they reach our oceans they don’t kill animal life and pollute our rivers and streams. Volunteer in your community to clean-up neighbourhood garbage, install solar panels, and eventually buy an electric car; I encouraged students to walk, cycle and just simple unplug and go outside. I have spent many hours reading all the things we can do at home to help save our planet. From buying used things to minimizing spending habits especially on clothes and shoes.

Overall, I think I am a pretty good, ethical person who wants to do her part and help save the world for our children’s children.

I have watched and encouraged students to watch documentaries such as; ‘One Strange Rock’ hosted by Will Smith, ‘A life on our planet’ presented by David Attenborough on his mission statement to the world, and more recently ‘Cowspiracy’ & ‘Seaspiracy’. Other interesting shows ‘The Magic Pill’, ‘Chasing Ice’, ‘Chasing Coral’, ‘Our Planet’, Live and let live’, ‘Food inc’… the list goes on and on.

Here is what I now think…

but do it anyway!

We have to be the action towards positive change because every little bit we do will eventually add up. If we change the mentality of the world, slowly the next generations will do these things automatically. And when they reach powerful positions, run our countries and big business they will make the necessary changes, break free from the status-quo of business and profits at all costs, and the ethics will carry forward. If this doesn’t happen, and unless businesses and global leaders jump on board, we are done for anyways!

Two main things need to happen immediately; businesses need to become ethical and we need to talk about the most controversial issue; population control! Everything else will fall into place once these two things are taken care of.

And to do this, we have to go up against big businesses and world leaders to demand change. We have to become activists in order to change our world or we will die. And together, the masses have power. They know this. We are afraid because we like our creature comforts and don’t want to have anything taken away from us. We don’t want to rock the boat, because if we put our necks out, we could get them cut off. However, if we are not brave, we are already dead.

When I look towards the future, I would think those with the most money will survive any armageddon because they have already started preparing for the end. Buying up islands, giant yachts, stockpiling food and water, vaccines, medicines… We need to stand up and say,

‘It is not ok to strip our oceans clean dreading the bottoms and killing all life, because without an ocean we will die.

It is not ok to strip the land of forests for food crops to feed cattle or grow gmo monocrops like palm oil, because we will eventually all die. Our planet cannot sustain like without oxygen.

Biodiversity is what makes our planet run smooth, a whole lot of different moving parts that keeps the balance in check. Many of which we do not even understand, yet we rip out and kill off many species without thinking twice in order to make giant profits for corporations. Just because it is going on under water, that doesn’t mean it is not going to have an impact on humans or our Earth in the long run.

COVID-19 is because we are infringing on animal kingdoms, not giving them enough space to live and their diseases are now crossing over to us, most importantly diseases we cannot fight off, but those which can kill us. Some ancient forms of the flu which we are not immunized against could wideout an entire continent. Our job is to keep a balance on Earth.

The main issue with cutting down forest and killing coral reefs are the long term side effects on the food chain. The most obvious result of the removal of predators in an ecosystem is a population explosion in the prey species. They usually balance each other out. As the prey population increases, there is more food for predators so at first predator populations increase however, as the number of predators increase, more prey are captured. As a result, the prey population starts to decrease. We can see this all over the world, as fishing boats come home empty.

Corporations are not people.

Corporations consume vast amounts of natural resources, pollute local and global environments at little or no cost. Further, in the case of large financial institutions they throw economies into recessions due to poor risk management, and, in some cases, hurt employees’ well-being if wages and working conditions are inadequate. Without ethics at the heart of corporations, it is a monsterous entity growing larger and larger until it consumes everything around it. It has narcissistic, and psychopathic characteristics and if they were human, they would be institutionalised. Yet, somehow, we let them run the world.

It doesn’t really matter what we do if the big corporations do nothing but focus on making profits. We have to fight for ethical business practice and to hold people accountable for their corporations’ actions. Trace back until we find the culprits who designed the operations and make them stand trial for ‘unethical business practice’ causing the world to deteriorate. Hold them accountable for irreversible damages against the human race, just like war criminals. With that money seized we can start to fix the planet. It is the classic story of David and Goliath, the ordinary people going up against to fight the giants. If we did win, we set up real protective organizations that are not funded by GMO and for profit food industries.

We need to support biodiversity.

Now asking people to not make as many babies is against our basic human rights. Today it is a right for us to decide what we want to do with our own bodies, and how many children we want to have. However, eventually this will need to be addressed. The statistics say that those who wait to have children until after their education is completed, closer to 30 years of age, have more financial security and decide to have less than 2 children. However, they can give more to those children and they have a better chance in life for a better life. With that in mind, eduction seems a key in the chain to saving our planet. ‘Our’ planet, not their planet!

Mother nature will eventually wipe us out with a virus or bacteria to retain the balance.

I know it is a touchy subject, but we need to radically reduce our population from 7,9 billion to 3 billion! That’s a big difference! Our Earth can healthily sustain our planet and all forms of life at this population. Once we start to reduce our massive numbers, we can radically cut back on the mass production of meat products and create less food and bring back protected rainforests, sea floors and roaming wild areas. It will not happen overnight, but by creating a law that we must only create one child per couple starting in 2022, just like in China, we could radically give better life to those who are already here, not only solving the issue with our planet with poverty and hunger, but also resolving world peace by not fighting over resources.

In conclusion, I don’t have all the answers, but I do feel the need to start the conversation. Not just with my students and their parents but with the world. I am asking each and everyone of you to become a ‘save the world’ activist!

It starts with you and me, and then we move through all walks of life!