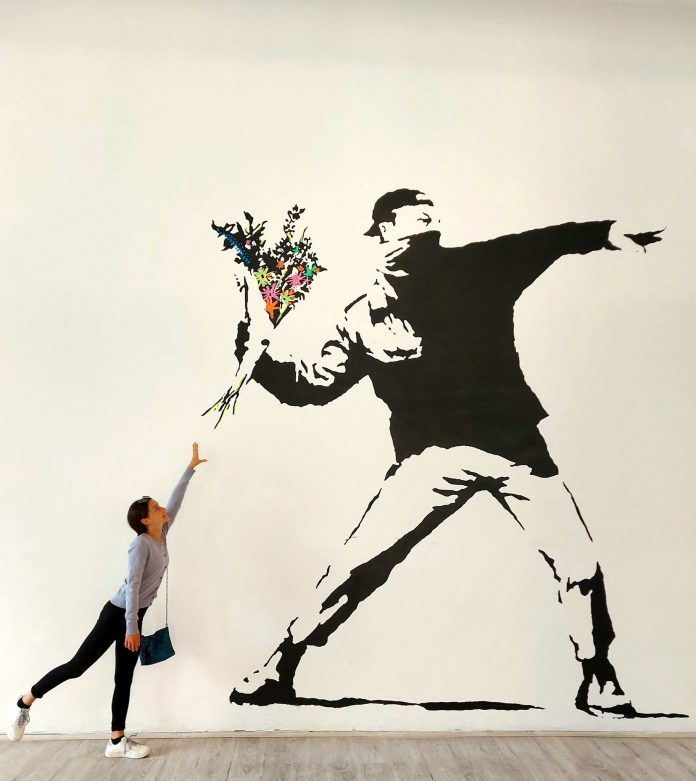 We went to see the Banksy exhibition on August 20th, the national holiday here in Hungary. On this day in 1038 King Stephen declared Hungary a Christian state. After his death, he was then canonized, or in layman terms, they made him into a saint… if you believe in that kind of thing…

Of course during COVID and the limitations it has brought, and the lack of tourism due to flight restrictions, more and more people are looking for things to do within their own borders. As restaurants close their doors forever, and shops go out of business from lack of foot traffic, in turn, the festivities that normally rule this day; like airracces and fireworks, bands and wine and food; are few and far between, replaced with a strange stillness.

However, a few people are starting to become less scared and more fearless as they venture around the country, as we see many locals without masks or not abiding by the 2 meter distance regulations in the streets or in the big multinational shops that have managed to remain open. After seven months, most business owners have been hit hard. Locals do not eat in fancy restaurants on their super low wages in relation to the cost of tourist revenue hot spots. Making strolling along the cobblestone walking streets, through the parks and even inside the museums a lonely journey; it was the first time, in a long time, maybe even since I was a young woman, we could hear more Hungarian being spoken than any other language.

I found Banksy and his strong messages about our planet, government and our responsibility more relevant today than ever before especially as some people take COVID -19 as a sign that the end of the world nearing. Surprising I know, but yes some religious nuts actually believe the time has come for Armageddon, especially after adding up all the signs; Earth’s deterioration, the hole in the ozone, the giant island of plastic, the oil spills, the massive extinction of species both plant and animal, the radical weather changes, the wars over resources which has brought famine, illness and severe drug use throughout the world as people try to cope, and lastly as the economy plummets people rob, steal and kill to survive. Our planet has reached maximum capacity and food supplies, clean water are going to be issues soon enough. 1+1=2 Sounds about right? Or is this a hyper exaggeration to keep us worried? And what would be the good in a population afraid to move in any direction?

It is time for some serious changes to save our planet! If not now when? It is high time that the powers that rule must retain the balance or it will all be over for everyone. If not by their hands, then mother nature herself will flick us off like tiny bugs. You can feel change coming, something is about to give as we whirl through the universe spinning around the sun, while a very real spinning out of control is happening just below the clouds as man devastates, and destroys the planet.

And others believe the whole COVID-19 virus thing is a giant sham; a way to eradicate an unwanted something or for the governments of the world to take back control of their people or on a practice run of a greater catastrophe on its way. I personally have no answers. I honestly don’t know and the whole thing leaves me feeling more confused, and having even less faith in the information circulating the Internet.

So, with all this crazy in our minds, we check out for the day, and take a rare moment amongst the chaos to stroll around the deserted streets, and poke our heads around the empty storefronts to see the damage of the COVID media-pandemic. How much is really about keeping us safe, or is this about destroying a large over-commercialization that keeps many tourist destinations afloat? I cannot figure out the why, but there must be an underlined reason behind all this mellowdrama because I don’t know anyone who is sick with this very serious illness; one that is so terrible that you could be walking around for weeks without even knowing you have it. Hmmm, no boils or rashes, or contagious fever, seems less than the common cold yet we must isolate everyone in case the old and weak fall ill. Noone talks about the hundreds of people with other diseases and illnesses waiting for operations that have been put on hold; many dying in the slow waiting line from curable cancers who are now put on the sidelines as we ‘conquer’ this COVID-19 virus. Wait, are there other more deadly viruses? Well yes there are. So why all the fuss about this one? Maybe to see if the world can work together on one specific topic as a cohesive unit. Which makes be think, is something else on its way? Is this the prelude to a deadly kiss, the preparation for the meteorite that is blasting through space as I type, the aliens who are on their way to invade, the volcanic eruptions that will cause the next ice age, or the next deadly pandemic that really will wipe us right out; something that is being freed right now in the melting icebergs from global warming; a superbug from prehistoric times just waiting to wreak havoc. Whatever they are preparing us for, it must be a doozy to go to all this trouble, because the practice run was to get us three week food-supply ready for the end of the world and the worst case scenario. Is it a nuclear war? Famine? As we stock up supplies (mostly wine over here) and isolate ourselves… Some people are even frantically moving around the planet searching for safer ground, and with that many are coming home to Hungary thinking that if something does go tragically wrong with the world, then at least they are home in their own country for the end.

Banksy’s work shows us to question the authority. It tells us there is always a hidden agenda. What is the population not being told? We are but the pions in the grand scheme of things. We are the worker ants that make the world go round while the elite at the top of the food chain make the decisions for the entire world. If there were an end in sight, would they even bother to tell us? Would they try to stop massive panic by not telling us? Would they try to save us, or try to make as much money right up until the very last second? When does the functioning money masses, the narcissistic business culture stop working and start looking around at the damage done? When? Well when it is too late- I am sure. They hide the truth because they want to keep producing hand over fist in case they survive a world breakdown.

Where did our civilization go wrong? They will study this in future generations, how we let the elite rule the world into non existence, and they will question us as to why we sat complacent. The few who may survive will ask us, why did the designer shoes mean so much, why was buying the Starbucks more important than saving the world? Why is there no deep compassion and connection between people. So many whys…

I am a daughter, a sister, a wife, a mother and a friend. What I want for the world is to love. By just simple loving our fellow man with the same passion we have for working. Step into the shoes of the less fortunate, think about the suffering of the ones who have no opportunities. I feel helpless to take action, but maybe if we all decide today to stop buying and start understanding, stop distracting ourselves and start to connect with one another, maybe just maybe, Earthlings of the world, we can change the world! Because when you make an unsafe product that is profitable and you think about your children playing with is, you will not make it in the first place. If you think about a medicine that might not be ready for trials but could be rushed through to make a faster profit sooner, you will stop to think about your own mother. Business transactions, and running the governments of the world should have the same viewpoint; do unto others (and I am not even a religious person). To think about cause and effect. To think about long term. To think about the future. Rant over.