While one person hesitates because he feels inferior, the other is busy making mistakes and  becoming superior. Henry C. Link

Mistakes, I make them all the time. They help us grow as a person and show us where we need improvement. If we never make mistakes, how would we learn?

After a morning of getting the family ready to walk up to the market, we walk out the door, and make it 10 yards before we stop to take off our jackets. I place them into our market basket and then we continue up to the square. Once there, the wind blows through us, I hand out the jackets, and we put them back on. As we walk home and the sun shines so bright, I have to stop again to gather our coats to carry home. And so it goes most days in April.

The weather can’t make up its mind. I have a suntan from a BBQ party a week ago and a burned nose, when we hit perfect summer conditions, and in tank tops, we drank beers in their back yard. The next day, it rained so hard that water came in our side door and the pool overflowed.

After the rain stopped, the flowers must have grown two inches over night, and the vines throughout the Languedoc started to show new green shoots. Today it’s windy and cold, and I sit in a vest over my sweater.

Some days while I work the canal boats, I notice people floating by on barges in bathing suits soaking up the sun, and I immediately think tourists. It’s still too cold for the French. They have a saying about not taking a single thread from your coat; you may still need it in April. However, come May, you won’t need your coat at all. (I probably butchered the expression, but you get the gist.)

Mistakes and Misconceptions about southern France:

Thinking that we moved to a mild climate was a big mistake. We thought southern France had milder winters than Vancouver Canada. Vancouver is wet 50% of the time, has a drawn out winter with mild temperatures averaging a humid 7 degrees year round. In France, the winter snaps you in half with 10 degrees one day and minus 10 the next, with bitter winds that blast your bones. Many days in winter, however, are still bright as the sun shines 300+ days a year. In our limited experience in south France, we have felt -10 in winter and as hot as 42 maybe hotter in August in our yard with no wind. That’s a gigantic span from -2-28 in BC. Mild is not the case.

Michele Thomas a CD language teacher always says, “Be daring, try to say what you need to say, even if you make mistakes.”

I take his advice and courageously speak to anyone that will listen to my broken French. Good advice for the most part but it did get me into a pickle. I was saying how much I love French wine because it has no preservatives in it. Some preservatives give me a terrible headache the next day and I try to steer clear from the red imported wines you can buy in the BC liquor stores. We were in Carcassonne city, letting the kids skate and explore all the winter marvels displayed over break. Our friends decided to nip into a restaurant for a pizza lunch and I ordered some red wine. In my broken French, I asked my friend Anne if there were any preservatives in the French wine. I explained to my friend Anne that in Canada, many times, when you purchase a wine, they are loaded with them. She politely said with a grin, “We do not put condoms into our wines in France, I think you mean conservative.’ Everyone around the table started to laugh at me, and I went about as red as my glass of wine. Funny now, at the time she probably thought Canada’s liquor stores give our contraception with their wines. Actually not a bad idea, just saying…

We had the notion of starting a business here in France, thinking it’s as simple as in BC. Well no, it is not and if you have a good idea and you are persistent, it is possible but the amount of hoops to jump through and the stacks of paper to read and sign are enough to make your head spin. So no, a business in France is not easy to start, run or finish. Nevertheless, we are hopeful it will be worth all the start up difficulties one day.

Thinking that my endless amounts of positively and optimism would be enough to endure a life change as big as this one. I know it’s hard to believe, but I wear down; from the paperwork, learning so much at once, not having a support system in place and not having the right words to express myself in French. However, when something does come together, it sure feels like a small victory.

The lurgies that linger in the Languedoc throughout the winters are nothing to sneeze at. Never in my life have I seen such illness. High fevers that hover around 40 degrees for a week, chest congestion that keeps you coughing for months and for my son Daniel that means ear infection after ear infection, with rounds of antibiotics.

It sounds like someone is coughing up a lung in every line up, at every store. Maybe with the hot weather lingering for so long, the bugs, viruses and germs get so strong, that when the cold snap hits they jump onto anything that’s warm, including us. Our first year here, the doctor told us that we should expect to catch every virus that comes along until your body gets used to them. Eighteen months in, we have never been so sick in our lives. Knock on wood, we have been illness, ailment and complaint free for nearly 2 months. I think we have well acquainted ourselves with every bug from here to Montpellier to Barcelona and back.

Tros chaud means too hot, not too much, like I have been saying for the past year. In Hungarian chok pronounced shook means lots and I had a brain fart and somehow managed to memorize the wrong word in a different language. Our friends think it’s funny that I keep saying too hot, for too much, and probably think it’s a Canadian expression. I am starting a new lingo here in the Languedoc; remember you heard it here first! 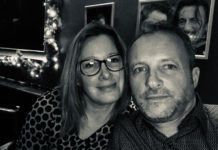