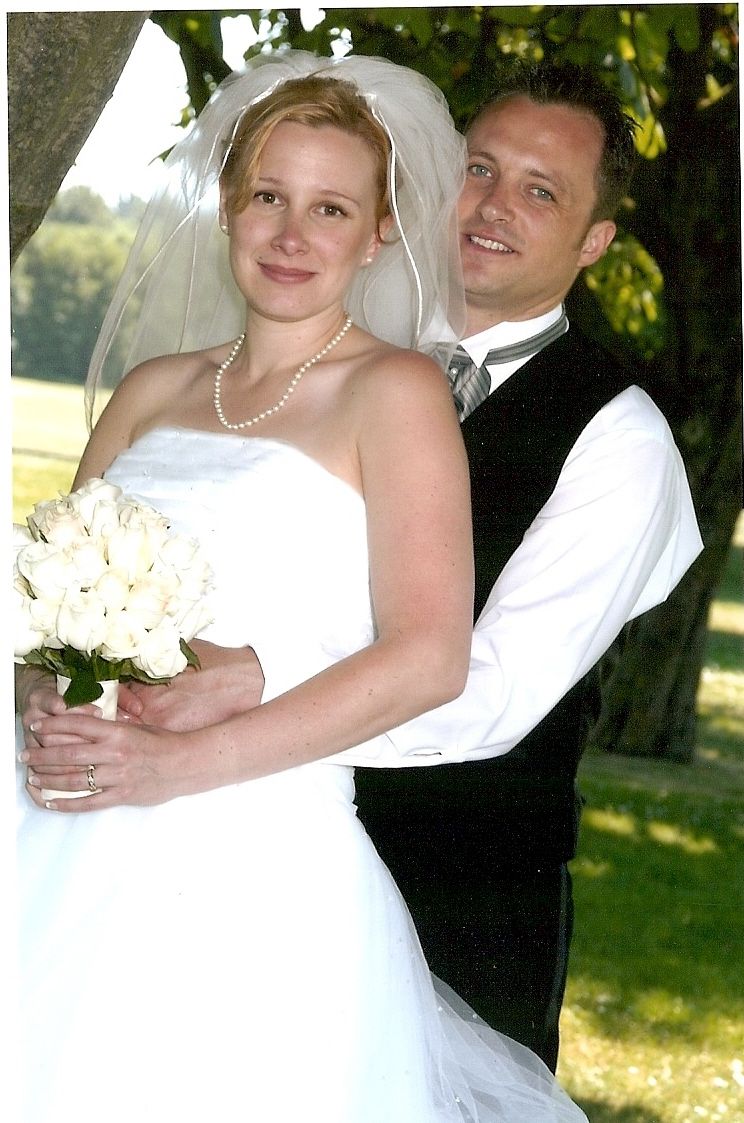 Today June 7th, 2012 is our 9th wedding anniversary, although we have been together since Easter 2002.

How amazing that we ended up together. I think destiny played a part in our happy ending.

Alfonz was born and raised in Hungary and lived there until he was 17. He came with his family to Canada in a time during communism when it was not allowed.

They ended up coming to B.C. from Saskatchewan after a mishap. Lucky for me they ended up in the building my mother and I lived in. They moved in on the same floor no less to follow the path laid out for them. They say, ‘It is written.’

I was 16 working at KFC and going to school; trying to get ahead in life, and out of the crappy apartment block we lived in. I remember when I saw Alfonz for the first time. A family speaking Hungarian was unloading an old station wagon that had seen better days, in front of our building. I told mom that they were Hungarian and didn’t think much else about it.

Mom managed the low-income housing block and got to meet them to let them into their new apartment, a one-bedroom unit for all four to them; tight squeeze but they made it work.

We went to Queen Elizabeth Senior Secondary School in Surrey, B.C. and like we did back then, we all met at the smoke pit. My friends were up to something trying to keep me away from the hangout. They knew Alfonz and I were both Hungarian and that we would be instant friends and wanted to keep the cool new foreign guy to themselves if they could.

I finally bumped into Alfonz with his high top runners, shabby long hair, tight pants, metal shirt, and jean jacket. He was a mess. The only thing that caught my eye was his reptilian-eyes in the dreamy shade of grey-green next to dark olive skin women swooned over.  He was 115 lbs soaking wet, smoked like a chimney and I knew right then I would know him for the rest of my life.

We walked home together and realized we lived in the same complex and I paraded him around meeting all my friends and family. George, my big brother and James, my friend from across the hall, became his closest friends.

Mom and I eventually moved to Aldergrove with her new hubby, and Alfonz stuck with us throughout the years. He was over at all the family celebrations and was a close family friend. We didn’t get together for a decade. In that time Alfonz went from rocker to preppy. My friends drooled over his new haircut, his new look- collared shirts and baggy jeans and he had gained weight from working the yard at Alpi’s European Auto parts. The very same company he later bought and sold.

He was becoming a man, and my girlfriends were taking notice. I even set him up a few times with my girl friends. Still he hadn’t turned my head.

I never went long without seeing my friend Alfonz. He was always around. Throughout my relationships and his, we always remained good friends.

Until we both found ourselves single in 2002. We were both living downtown Vancouver. A year before I had gone through a bad break-up and had no intentions of finding another life partner.

Alfonz came over on a Monday night dinner I held each week, where I would treat my single friends to a home cooked meal. It was Hungarian food night so of course I thought of Alfonz.

Up until then, no one made any good connections on my single mingles. Alfonz or my girlfriends didn’t find each other remotely attractive. Thank god! As things would have turned out differently for all of us.

After that first day, Alfonz would come over to get me out of the house on my days off, take me dancing with his friends or out for dinner whenever he had the chance. I thought we were just friends hanging out until one day I guess he did turn my head, and I found the man I was always looking for. He was always there I just didn’t see him.

Recently we figured out that Alfonz’s trade school in Budapest, Hungary is metres away from my Nagymama’s apartment where we later bought our Hungarian home. At one point during my early teens, mom and I considered moving to Hungary to live with my grandmother. Destiny would have had its way, and I believe Alfonz and I would have found each other either way. Such is life, and it is already written.

Isn’t it funny how things work out no matter what? Is it destiny or just playing the best hand?

22 years later, 10 1/2 years together, 9 year married, 2 great children, we travel the world as the best of friends. I am grateful for Alfonz entering my life.

I couldn’t have picked a better husband if I tried. Oh wait he picked me. That’s Hamori love story!