Our family had a fabulous experience filming a TV show for HGTV!

It started with a comment on our family adventure website ‘That’s Hamori’ from Leopard Films, and a producer named Kadijah. She happened across our journal, while searching for people moving to Europe and asked me if I had heard of House Hunters International.

At first I thought it was a very creative spammer or maybe one of my friends teasing us about moving to Europe. But then again it would be a perfect fit! Why wouldn’t they contact us? We decided to seize the opportunity and contact them back. We had nothing to loose!

Have I heard of the show? Ah yah! Couples look for real estate with their realtor, in their country of choice, and make a decision out of three featured properties. Which will they choose?

We were cult followers in White Rock BC where we used to live we would record each episode and watch them after the kids went to bed on our weekly date night.

Our family got the privilege to share our story about our move from Canada to Hungary and then to France on national TV. House Hunters International followed us from White Rock to Budapest, then in a Westfalia Camper Van around Europe until we found and fell in love with Capestang France, where we eventually bought a house and are now learning to assimilate to our new culture.

It takes a huge leap of faith to move across the world to start a new life. To let people come along, success or fail, some might say we are opening ourselves up to scrutiny. True in some ways, however, if you are not open to different experiences, you may miss out on what life has to offer. We agreed to filming, and kept an open mind all the while.

I was in Budapest when the fabulous House Hunters International staff met up with me. Melissa was the director, Mat was the cameraman and Andy was in charge of sound. They hired a Hungarian driver for the day to explore the city filming all the while.

At 7:45am, I went down stairs to ‘Nagydiofa’ Street where our apartment is located and found the HHI staff recording B footage of the beautiful old buildings Hungary is famous for.

The House Hunters gang were an energetic bunch, all smiles, all coming from England and all seasoned in their jobs. We started out in the apartment building, getting some shots of the inside and outside of the building. My grandma lived her whole life just one floor above our apartment. Alfonz and I bought our own home in Budapest 4 years ago in the same heritage building with so much family history.

The structure of the heritage building is simple stunning; the architecture is typical of buildings built for the thousand-year anniversary of Budapest. The stairwell leaves a pretty strong impression, the vaulted ceilings, the hard wood parquet floors, the giant low windows to the busy street below, all add to this homes charm.

It was a fun process, doing different angels of our life’s story, how and why we ended up in the apartment, and where we are going from here.

Once that was done, Csilla, Alfonz’s childhood friend, came over and we had a coffee on camera, talked about the features I love most about our the Walnut Apartment which is lovingly named for the street below.

Then we showed them the town. It started to snow, a light fluff covered Budapest, giving just the right amount of magic for the shoot. Frozen, we endured a day of sites and the best Budapest has to offer, as the streets were deserted, we got most places to ourselves and walked through virgin snow.

A lively Gypsy band, the Danube River views from the Buda Castle, food at the Pias Budapest’s big market and lastly Vaci street, the walking strip that parallels the river, they filmed us as we walked through the snow, the group of us persisted, stopping for lunch and later coffee and dessert. The HHI staff was amazing! I truly enjoyed the experience, and even as sick as I was, they smiled the whole time.

We said our goodbyes and I kept thinking, Julia Roberts works hard for her money! It is a lot of waiting, and retaking, listening, and telling, but fun all the same.

I miraculously made my flight back to Montpellier as most flights were cancelled due to the snow and the French airport laborers’ were on strike for their right to strike whenever they want to. I was using up some of our Hamori luck!

I met up with my family at the Beziers airport, where they warmed me up and took me back to Capestang for a quick night’s sleep.

The next day we promptly started filming with another film crew.

From being in the minus 15 in Budapest, my cold turned into a nasty chest infection, and the cough that followed slowed us down, but the crew was ever so nice about it, and made me feel comfortable while shooting.

Izzy, our fabulous zesty producer/director from Britain, our cameraman Phil a father of 2 1/2 and smiley Ray the sound guy, rounded out the crew nicely.

My kids fell for them as soon as they walked in the front door! We started the first day filming in our new home, showing them the fabulous features and the decorated kid’s rooms.

Alfonz slipped away with the kids to film upstairs and in the square buying a baguette, and surprisingly the children were on good behaved, and they enjoyed the process of pretending, especially my little diva Angelina.

They took us out to a nice restaurant near the square for an Italian lunch, where Daniel sat himself next to Phil and Ray and they were very graciously entertaining him. Showing their camera equipment, both kids were aloud to look through the camera lens and were taught silly games over our lunch break. Daniel and Angelina were so adorable. They made us very proud.

The next 2 days were all about showing North Americans the other 2 contender properties we didn’t pick with our lovely friend Mallory. The days were long, but it was exciting to share our new life with them.

We stayed in the same clothes for the entire shoot, and with me running a fever and no clothes dryer, this wasn’t the best part for me. Luckily, I had the same dress in a different color and switched them out on the last day. Tricky right? If you look close on the cut you can see it, but you really have to look hard.

You have to admire the efficiency of the House Hunters Team, checking off all the angles for the shoot from a list and making sure all the information was said on film. During the whole duration of filming, the staff made us feel part of the fun. It was as easy as could be.

Izzy could live next door, totally down to earth and hopefully comes back to visit us with her family. In spite of all the fame the show has, being one of their director/producers, you would never know it. What a great girl!

Ray and Phil work together often and have it down to an art form. They not only work well together but are obvious friends. Ray was a sweet guy, and literally smiled the whole three days. The kid’s liked him a lot, and he made them laugh. I truly appreciate anyone that likes my kids.

Phil cracks me up. He loves food as much as I do, describing his food, and enjoys eating it. The prefect person at a dinner party. Being on the road, he is away from his young family often. It was his mention of never having proper Hungarian food while in Budapest that prompted me to feed the crew. I made Hungarian paprikas chicken with homemade nokedli and cucumber salad.

I couldn’t imagine Alfonz being away from me for too long, and I wanted Phil’s wife to know, we took good care of him while he was with our Hungarian/Canadian family in Capestang, France.

Ray mentioned that Phil usually eats what he orders plus Ray’s leftover. Anyone that loves food that much can come by for a meal anytime!

The next day consisted of showing them why we moved to Capestang. The community caught wind of the camera crew’s arrival and the mayor and the head of tourism gave House Hunters International the grand treatment and a big thank-you party to all of us for filming such a well-known show here.

They posted a story of our family in the paper, Midi-Libre, claiming we found the American Dream village. How true? Well for us at least!

At the party, the baker in the square donated beautiful cakes, a fluffy pastry and on the inside was apple or custard with a toy prize inside. Someone else donated traditional French apple cider, which was a cross between a beer and apple juice, surprisingly refreshing.

We joined the crew back at their beautiful hotel, ‘The Chateau’ for a decadent meal. It is known as the fanciest accommodation in our little French village, and only being a few years old, with grand features, and a large pool, it is no wonder why.

Our experience was amazing! Each morning we woke at the crack of dawn, showered and met up with the House Hunters Crew for another day of filming. We went out for lunch the second day too, and got to know the crew quite well over the three days of filming.

All I can say is thank-you to them for making it as painless as humanly possible.

If ever we decide to make another move to another continent I will be calling Kadijah at Leopard Films to share our story again.

If you are thinking about sharing your story with House Hunters, do it! The experience is well worth it. 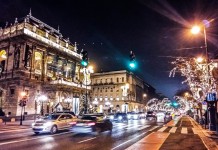 Only the Best in Budapest, HHI Full Episode 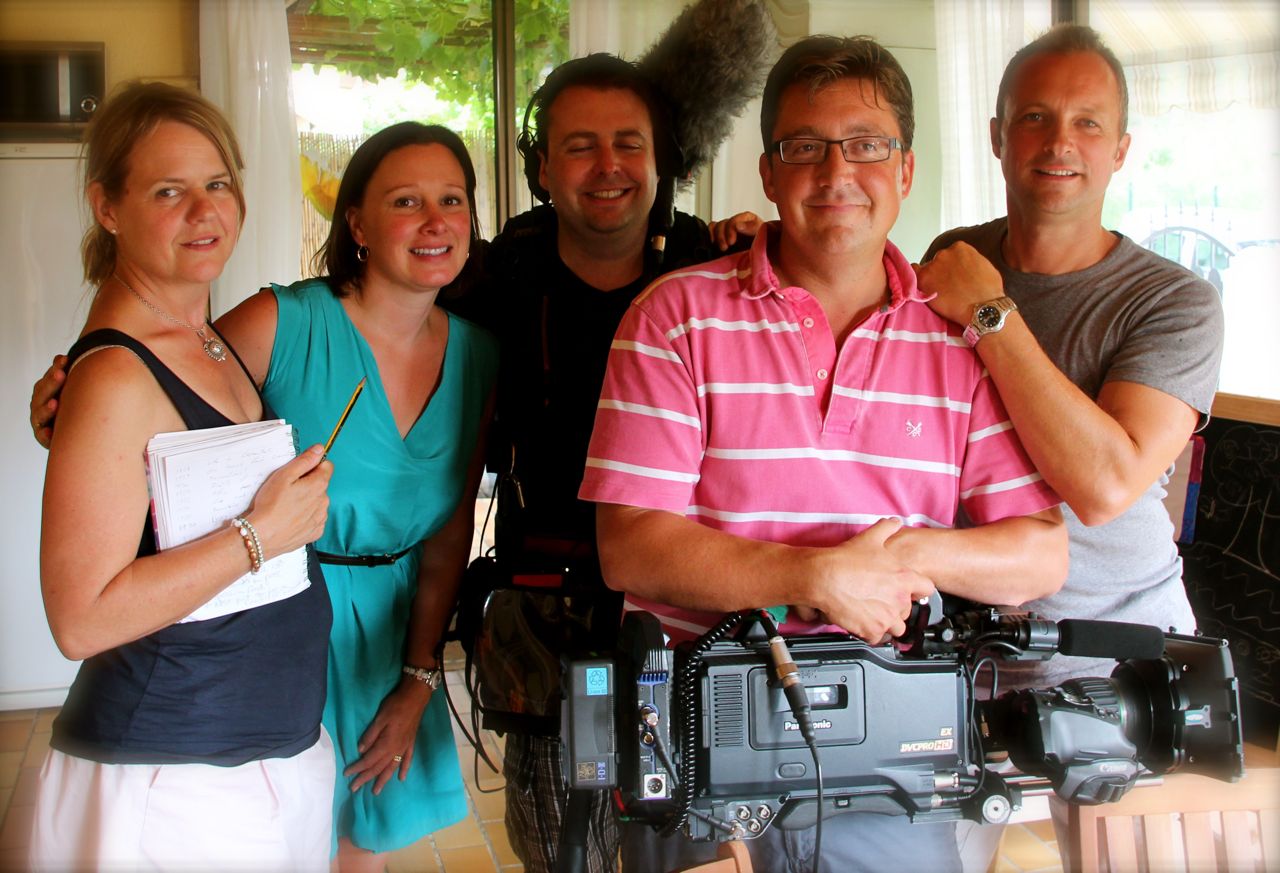 House Hunters Returns – What’s It Like To Film Reality TV