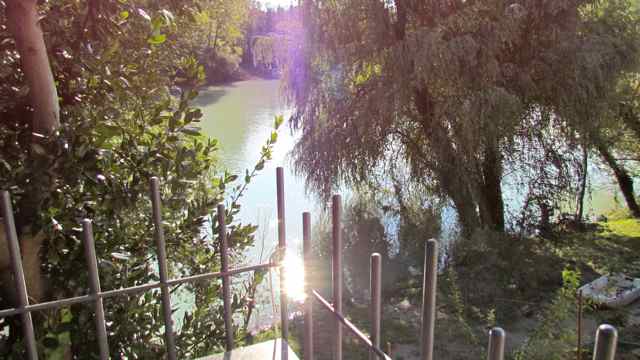 After a week of down time in Budapest, dealing with our family funeral, tying up loose ends regarding financing, we embark towards France.

The road from Hungary to Slovenia was a wintery blur. Heavy rains and snow at higher elevations made Slovenia uneventful except for the fabulous bean soup we ate at the gas station while I was fevered. Angelina and I have been fighting tonsillitis for a few days now.

When it rains I don’t mind being stuck in the van. For me it the best time to travel. We don’t feel like we miss out on tourist sites, and I don’t feel guilty about missing our daily exercise. Great time to write or catch up on my reading.

By the Slovenian border, on the Italian side lies the beautiful city of Gorizia. Alfonz found a B&B right on the bank of the Isonzo River, a river that starts high up in the Slovenian Alps, and flows through Italy and eventually to the Adriatic Sea. It runs bright blue in the summer. With all the rain this region has been having, it is more brown, but it is known for the striking shade of blue!

We had a traditional Italian meal our first evening in Gorizia, at a restaurant called,  A La Luna, on the main drag of the town. We walked the streets, browsed the stores until 7:30 when the restaurant opened.Our waitress, dressed in traditional clothes, order for us. The kids got spaghetti with ragu, which I thought was tomato and meat sauce, but no just meat and gravy like you dip KFC in. Ange and I thought it was pretty good, but no one else. My family adventurous, yah right! We received a schnitzel with ham and cheese under the breading, pan fried potatoes, a bean salad and a potato pancake this warmed cheese. We had our fill and went back to our modern B&B for a sleep.

The apartment is amazing! It is new, clean and with a river view from our windows of the rushing water treacherously swirling below. We slept like logs as we listened to the water swoosh by. By the next day the river calmed and some of the beautiful colour showed themselves.

Gorizia has a historically kept up castle. Katja, the Flumen B&B owner, gave us free tickets to explore, and we sure did. The kids got to see first hand what a castle looks like in the 1100’s when they were functioning. With furniture made out of wood from the region, weapons made on the premises to defend themselves and even a prison, the kids were in their glory. The views from the perched high castle of the town below are breathtaking. We made a homeschooling day trip out of it!

History: Gorizia, is mentioned for the first time in a document dated 1001. Its unusual geographical position has led it to be culturally influenced by interbreeding between the Latin, Slav and Germanic civilizations. From 1117, for four centuries, the castle was the seat of the Count of Gorizia, a powerful family whose dominion extended from the Tyrol and Carinthia to Treviso and as far as the Croatian border. The town subsequently went to the Hapsburgs and stayed under their jurisdiction until the end of the First World War, except for a few intervals when it was under Venetian or Napoleonic occupation. There are numerous monuments, squares, and palazzos bearing witness to these former times that are well worth visiting.

We took an extra day to rest, listen to the river and explore. We would like to thank our lovely hosts from the Flumen B&B in Gorizia for turning up the heat when I was sick, lending us the Narnia movies for us to watch, setting up an extra bed for Daniel and also letting their adorable children, Paola and Gorgio, play with our kids. Our kids played with their turtle, and visited their two caged budgies. Katja’s husband, Giovanni, talked to us about the different towns to visit. It made for a special stay! I highly recommend this B&B.

Then we went to Verona, home of Romeo and Juliet!