I found this particularly amusing. During our Port Aventura vacation, Alfonz noticed the signs and set up for the 12th annual World Rally Championships, and decides because we are leaving the day it starts, he would find a way to take some photos before we left.  Determined, he woke up super early.

He wandered down to the parking lot next to our Port Aventura Hotel, filled with big MAC trucks unloading their shiny rally racers for the race. It’s before 8:00 for sure, and with my big Canon camera in hand Alfonz asks at the gate, where to get in? They let him through the security gates, thinking he must be press. Alfonz continued towards the cars and started taking photos. One group let him in to take close up shots as they unloaded.

After about a half hour walking around taking great photos, someone asked him where his badge was. He said he didn’t have one and that’s when they escorted him to the gate. They said they were sorry, but rules were rule. Alfonz’s account was that they were very nice and graciously asked him to leave.

We were long gone by the time the race began. Alfonz said how amazing that they build two story work shops to service the cars on the tarmac. A whole lot of money goes in to this motor sport and we got to see it first hand.

The track is based on Spain’s Costa Daurada in the country’s Tarragona region, part gravel and asphalt. How To Make Spanish Seafood Paella 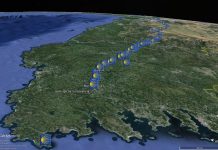